...out of time out of paper 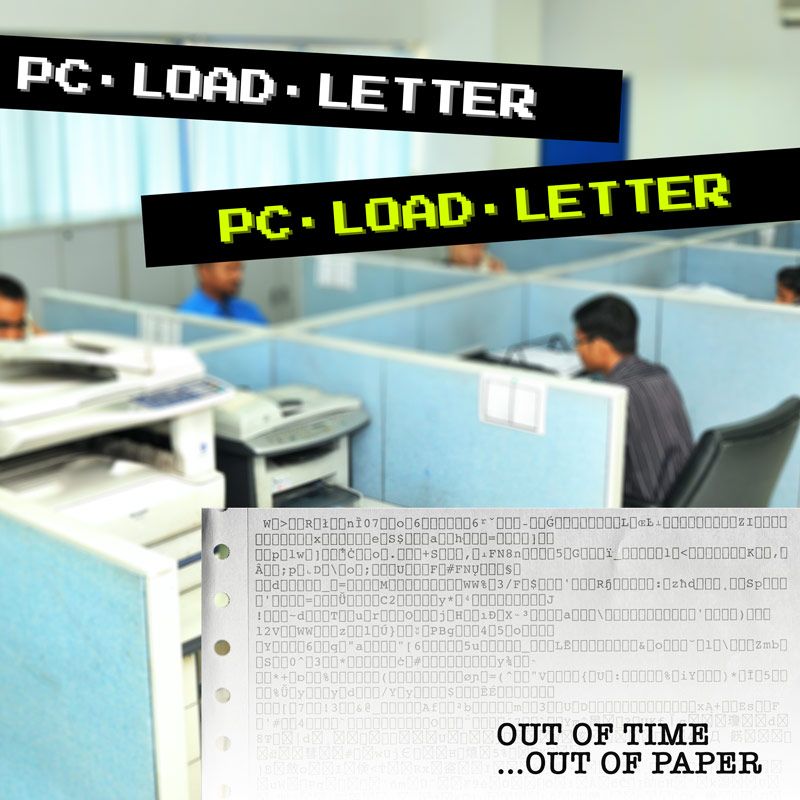 When Pc Load Letter recorded Out of time ...out of paper in a small makeshift recording studio located in a call center in Trenton, New Jersey, they knew it would be their first and last. After all, the three band members had more in common as co-workers working at IT Answer than they did as musicians or friends. Their adopted studio, connected by cubical walls, was about to be sold off to another firm, as with their jobs. They had until dawn to record their first and only album, eight tracks of caustic buzzing melodies.

Clocking in at just over 36 minutes, this album should be enjoyed with the volume adjusted to a safe level and the treble ratcheted down to compensate for the numerous feedback loops projected from Graham Pickman's Steinberger Spirit GT headless guitar.

Out of the gate, one can not help but hear echoes from the band Atari Teenage Riot from their album Burn, Berlin, Burn! Likely an accidental influence, Sergei Ostap's masterful wielding of crackling notes from the highest registers solidify this comparison. Sergei's warbling vocals dominate the record but are loosely held together by Doug Barnsbey behind the drumset and often operating the drum machine. It's not until the song Ford Taurus the album takes a hard melancholic turn where Pickman's trades in his abusive hammering of power chords to fully voiced minor chords. You get the sense the band found their sound and souls amongst the chaos.

The listener is shipwrecked on the precipice with so many questions that can't or shouldn't be answered.

Equally unexpected in this journey is the just shy of 2 minutes song, Fudge. The guitar is silenced at this crossroad and replaced with the amplifier's persistent hum hunting for its signal. The drums are substituted in favor of a simple brass triangle hanging loosely from Barnsbeys hand. Striking the metal as its slices through the buzz of the room. Listening carefully, you can hear the guttural vibration of Ostap's voicing the word "Fudge," slowly picking up pace and amplitude. As quickly as it starts, it all comes to an end with a single-note emitted from the percussive triangle. The listener is shipwrecked on the precipice with so many questions that can't or shouldn't be answered.

This record is full of hairpin turns, peaks, and valleys, and this can be experienced in the final song, a 14-minute sentimental offering from Ostap. Unlike the previous tracks, his lyrics are fully developed thoughtful verses that contain a somewhat a teenage and innocent comprehension of love.

He sings with such fragility, it's remarkable to think this is the same man who was barking out lyrics a few tracks earlier. As we reach the song's 12-minute mark, the vocals wind down to a mere whisper, as do the guitar's gentle fingerpicking. All that remains is the electrostatic noise, the hum of fluorescent lighting, and a door slamming shut.

As the final song suggests, this door is closed for future albums from PC LOAD LETTER. How could another album ever exist in the same universe? As for Sergei, Doug, and Graham, rumor has it they performed a small show at JoJos Tavern, a local sports bar in Trenton, but haven't performed together since.

People close to the band say that Sergei started a new electro-punk band called CAPS-LOCK, and Doug and Graham are working as servers at the local Buffalo Wild Wings. It's unlikely we'll hear anything more from PC LOAD LETTER, but what they gave is undoubtedly enough.