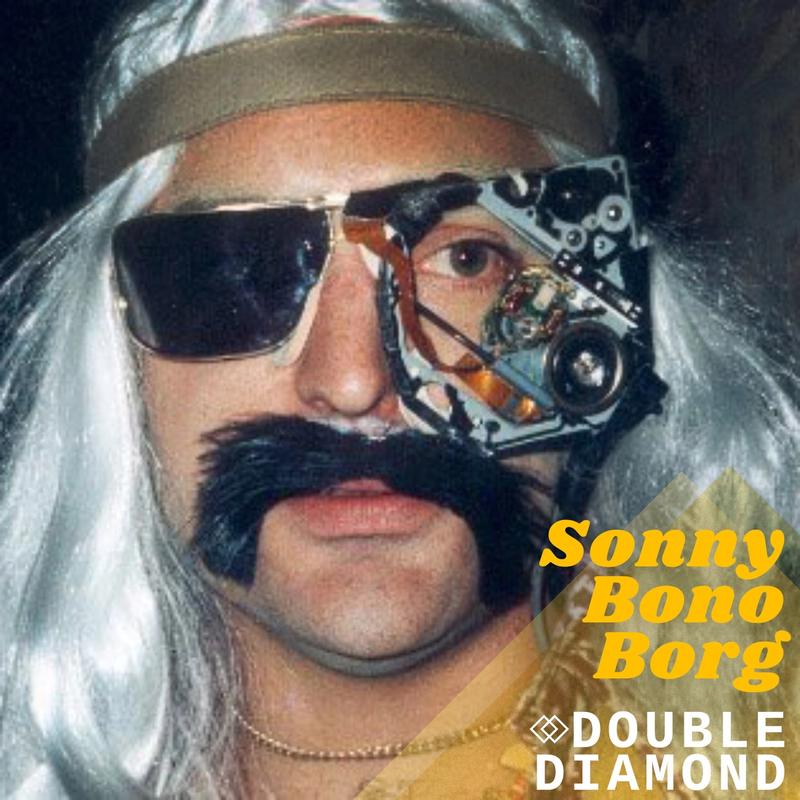 We often hear that art imitates life. But sometimes life imitates art so presciently that you wonder if the artist—somehow—had a momentary glimpse into the future

By now, we all know that Sonny Bono died while skiing at Lake Tahoe in 1998 after crashing into a tree. What many people don’t know, however, is that the influential early dance rock band Sonny Bono Borg released an album in 1983 called Double Diamond.

Whether this is coincidence, foresight, or something else entirely is immaterial—Double Diamond deserves to be heard completely on its own, apart from its later, fatal connotations. This is an album that bites with the strength of a crocodile, and even drags you through the muck like one. It is relentless, all dials turned up to 11 for the album’s entire 33-minute duration. It is the aural equivalent of a death-defying cocaine binge.

Sonny Bono Borg began as a duo, in essence a proto Daft Punk. The project was the brainchild of Alex Matheson and Femi Okoye, who met as freshmen in NYU’s then nascent film program. That background helps to explain some of the cinematic impulses in SBB’s earlier work, which was more maudlin and less fun than what the group eventually became.

After two middling efforts that call to mind both The Joshua Tree-era U2 and M83’s more saccharine work, Matheson and Okoye broke free of whatever restraints they had consciously or unconsciously yoked themselves with. Or maybe they just found cocaine.

The beats in Double Diamond simply do not let up. The feeling is of a wannabe utopia filtered through the grimy world of early ’80s Manhattan.

Opening track “Babe, I Got You” sets the pace for the record. The song clocks in at two-and-a-half minutes but feels much shorter. In many ways, from the Lower East Side setting to the “give these youngsters a chance” vibes, it’s a funhouse mirror of “Blitzkrieg Bop.” It also settles behind your ear in a similar way—it’s no surprise that it because a Gen Z anthem that ultimately provided the backdrop for a series of Nissan commercials.

That song also introduced a new element of SBB: multi-instrumentalist Sam Hader, who joined the group just two months before they were set to record Double Diamond. As the story goes, it was Hader’s idea to move away from Matheson’s recorded drum work and move the backbone to an entirely electronic format.

Hader spent his youth in Hamburg, Germany, a teenage fan of the early krautrock scene—clearly the most obvious influence on Double Diamond. The unyielding, perfectly syncopated beats of Hader’s drum machine were much more effective than Matheson’s so-so drum work. Matheson would later admit that not having to focus on drumming led to him viewing the songs from a different angle—likely changing the sound of SBB for good—while also allowing him to explore his entire vocal range, something he never could have done sitting behind a drum set.

Okoye, too, had a similar musical revelation around that time. After traveling to his parents’ native Nigeria, he was inspired to incorporate Igbo elements into the SBB soundscape. It was like Talking Heads without the cultural appropriation. The traditional instruments Okoye brought to the studio clashed (or maybe entwined with) Hader’s electronic backbeat. You hear it best on songs like “Don’t Mind Me” and “What Did Happen”—the new meeting the old, the physical meeting the digital. The effect brings you out of place and out of time.

The back half of Double Diamond plays out much the same way as the first: relentless. Matheson’s voice gets a little higher on “Melon Alcoholic,” and perhaps Okoye and Hader add an instrument or two, but the effect is the same. That makes Double Diamond something of an outlier in the realm of classic albums—with the exception of Rumours and perhaps Harvest, there are no notable records where the sides are completely interchangeable.

You can choose whether to dock points from SBB for that or praise them for it. I, for one, choose the latter. To keep up that kind of mind-bendingly consistent work over the better part of an hour, and to do so in a style of music that hasn’t ever really been heard (or even attempted) before is a Herculean feat. And Sonny Bono Borg did it with aplomb.

It’s shame what happened to Sonny Bono on that day in 1998. And it’s also a shame that that’s what Double Diamond will be forever best remembered for. Legends like Bono deserve to go out on their own right. And legendary albums like this deserve to be known in their own right, devoid of any coincidental context.